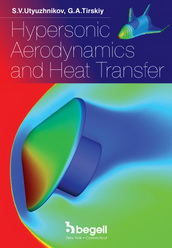 Results of theoretical and experimental studies of the problems concerned super/hypersonic flows around the models of real space vehicle configurations such as "Buran"-orbiter, winged cone (airplane-like body), Clipper space vehicle, Martian planetary probe are presented. Theoretical analysis is based on solution 2/3D Navier- Stokes equations and their simplified asymptotic models with account for equilibrium and nonequilibrium chemical reactions taking place at the background of relaxation of excited internal energy modes of the particles in the shock layer and on the vehicle surface.
Exact and simple relationships for the transport of species mass and heat are derived from rigorous kinetic theory for multicomponent mixtures of gases and plasma with different diffusion characteristics of the species (governing relations - thermodynamic parameter gradients expressed through the fluxes) as well as velocity slip, temperature and species concentration jumps boundary conditions for the surfaces of finite catalycity in multicomponent chemically and thermally nonequilibrium gas flow.
Phenomenological and kinetic models are developed for heterogeneous catalytic reactions on the thermal protection materials of the space vehicles entering Earth and Mars atmospheres along gliding trajectories.
The problem of multicomponent thermally and chemically nonequilibrium air flow in inductively coupled plasma torch and jet flow around the models installed in the facility work section in considered. The possibility to specify catalytic properties of real heat shield coatings are demonstrated using numerical and test values of heat fluxes or surface equilibrium radiation temperatures.
Original iterative/marching method to solve viscous shock layer equations is presented. The method is based on splitting of marching component of the pressure gradient onto hyperbolic part and a part that minimizes the elliptic part to a maximum degree that are then subjected to the global iterations procedure. Using the splitting of this kind allows numerical obtaining the drug and heat transfer coefficients within single or couple global iterations with reasonable for practical purposes accuracy.
The knowledge area connected to development of large computer software for conjugate problem of ballistics, aerodynamics, vehicle heat transfer and thermal strength of constructions of variable mass and shape is developed for all stages of the modern rocket-space vehicles designing.