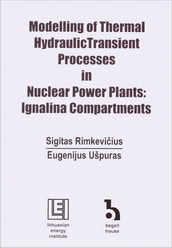 The monograph presents the fundamentals and results of mathematical simulation of transient thermal hydraulic processes occurring at the Ignalina NPP compartments during the loss of cool-ant accidents. The building structures of the compartments constitute the last barrier for the fis-sion products to enter the environment. The maintenance of this barrier's structural integrity in case of any initial event is one of the nuclear power plant's safety ensurance tasks. The integrity of the structures during accidents is defined by the behavior of the thermal hydraulic parameters in the compartments.
The main Ignalina NPP compartments and systems, including heat exchange and flow trans-fer processes, occurring while the steam-gas mixture flows from the ruptured location into the special condensing pools or into the environment (if special pressure relief panels are opened in the compartments), are described in the monograph. A lot of attention is given to bubbling and condensation processes of the steam-gas mixture in the condensing pools of accident localization system, which functions as containment sites. Other processes, due to which energy is directed inwards or outwards (example, heat exchange with structures, cooling of gas and condensing pools in compartments with special sprinkler systems, heat and mass transfer during the drainage systems operation, etc.), and which have impact on the behavior of the thermal hydraulic pa-rameters in compartments, are also taken into account in the analysis.
Models for the analysis of thermal hydraulic processes at Ignalina NPP compartments are developed and described. The state-of-the-art computer code CONTAIN, developed at Sandia National Laboratory (USA), as well as computer codes DRASYS, RALOC and COCOSYS, de-veloped at GRS mbH (Germany), were employed for the modelling. These computer codes are recognized and employed for NPP safety ensurance worldwide. The analysis is performed and thermal hydraulic parameters in the compartments are evaluated in the case of guillotine ruptures of various size pipes. Since accidents analyzed in the work are postulated in different compart-ments with different release paths of gas-steam mixtures and different blowdowns through the rupture, several models were developed for the simulation of these accidents. Specific character-istics of the analyzed systems and of the compartments and their models are described.
The modelling of accident processes at Ignalina NPP compartments was used not only for the safety ensurance, but were also directly employed to propose and justify modifications. Some examples of practical analysis are presented in this work. The analysis results were used in im-plementing knock out safety panels, designed for the pressure suppression in the central hall, and evaluating the modification, which increases the drainage water capacity from the drum separa-tors compartments. The calculated results of the parameters' behavior at Ignalina NPP compart-ments are employed for the implementation of ‘leak before break’ conception, by choosing the most sensitive parameters, the change of which enables the operative determination of leaks through the pipe, and preventing the pipe crack from outgrowing into a full rupture.