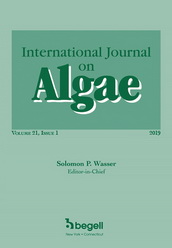 Algae are a heterogeneous assemblage of phytosynthetic organisms, one of the most vast and diverse groups of ancient photoautotrophic pro- and eukaryotic organisms (about 30,000 known species). They are micro- and macroscopic, unicellular, colonial, or multicellular, mobile and immobile, attached and free-living. Algae are widespread in water and soil habitats, at different geographic latitudes, and on all continents. They occur in waters with different degrees of salinity, trophicity, organic matter, and hydrogen ions, and at various temperatures. They include planktonic, periphytonic and benthic organisms. Algae are unique model organisms in evolutionary biology and also are used in various genetic, physiological, biochemical, cytological, and other investigations. Algae have practical significance as edible or poisonous plants, as indicator organisms in the monitoring of ecological systems, as agents of self-purification of polluted waters and in the purification of sewage, as the primary producers in the trophic chains of hydrobionts in marine and freshwater, and also as organisms for biotechnology.
The quarterly International Journal on Algae (IJA) publishes selected papers translated from the first Russian language phycological journal, Algologia, founded in 1991 in the former Soviet Union. The aim of Algologia is to present recent advances in algology. The journal covers both fundamental and applied aspects in algology, including papers based on the results of wide range of field and experimental studies, as well as reviews and surveys and procedure papers. The journal is intended for specialists in theoretical, experimental, and applied algology, hydrobiology, microbiology, all scientists using algae as a model organisms for research, and all those interested in general problems of biology.
The aim and scope of IJA is to inform the western scientific community, especially algologists, about original studies by scientists of the former Soviet Union and Eastern Europe in the following subjects: general problems of algology; morphology, anatomy, cytology; reproduction and life cycles of algae; genetics; physiology, biochemistry and biophysics; ecology, cenology and conservation of algae and their role in nature; flora and geography; fossil algae; systematics, phylogeny and problems of evolution of algae; new taxa and noteworthy records; and applied algology.
Current Archive