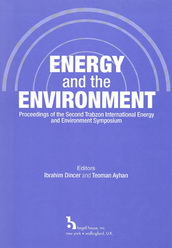 Energy and the Environment, 1998

Gas-solid two-phase systems are encountered in a large number of industrial applications such as cyclone separators, pneumatic transport lines, fluidized bed combustion systems, etc.
In these systems, the motion of particles depends strongly on their suspension density, i.e. whether the flow is in the dilute or dense category. Ina dilute system, the flow of the particulate phase is controlled by the local turbulent flow structure whereas in a dense system the particle-particle interactions supercede.
The performance of such systems can be affected by the behaviour of each phase and their interactions with each other. For example, in a fluidized bed combustion system, the combustion efficiency, and the production and control of emissions may be influenced by how well the fuel, oxygen, and the products of combustion are mixed, i.e. the effect of local hydrodynamics.
This presentation first gives a general overview of gas-particle systems including the interaction between the particulate and the continuous phases. The fluidized bed combustion systems are then analyzed from the hydrodynamic design point of view, and several modeling approaches are discussed. As the bubbling systems are extensively studied, emphasis is given to the circulating fluidized bed (CFB) systems.