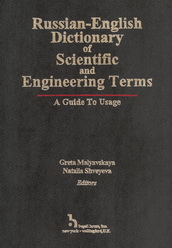 A large number of English-Russian and Russian-English specialized dictionaries available to a translator usually contain only terms whose knowledge represents only a apart, although essential, of what is necessary to know to translate a coherent text. In addition to the terms the translator must know with what words the term can be combined in a sentence, what prepositions are need to govern definite verbs, at what place the needed adverb more often stands in a sentence, where to put punctuation marks that the thought expressed by a complex sentence could be understood by the reader; i.e., everything that perhaps at some time in the past was learned from textbooks, but was then forgotten with the passage of time. This book will aid in recalling the forgotten or learning the unknown. Nearly every term/word in this dictionary is accompanied by examples taken from the literature. Undoubtedly the expressions cited do not exhaust the possible versions of translation, but they may aid in expressing the thought in the English language more exactly and sometimes may even prompt a version of translation - the very context of examples can help the translator to select the variant needed. As the dictionary is intended for those who know the English language, explanatory marks are not used. The words and sentences are arranged so that the user could easily distinguish visually the word or word combination needed.