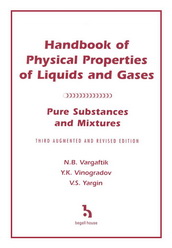 Handbook of Physical Properties of Liquids and Gases

The present book has evolved from the well-known basic reference Handbook of Physical Properties of Liquids and Gases, which has been published in four editions in the Soviet Union, the United States, and Japan, between 1963 and 1975.Since the last edition, both the scope and the experimental material and the methods of processing and compilation of data have undergone considerable changes. The experimentally studied regions of the reference parameters have been expanded to cover higher pressures as well as the regions of both high and very low temperatures, including the extreme states. Data are given both in the form of the detailed tables and correlation equations demonstrating the temperature and pressure dependencies of the properties. In some regions extrapolated values are given, which, as a rule, are indicated in the text. In a few extreme regions the property values were estimated theoretically. A thorough, easy-to-use cross-referenced index is included.