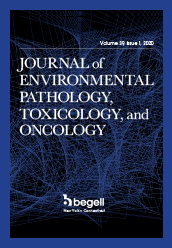 The world has become increasingly aware of and concerned about the nefarious effects of environmental factors on human health. Scientists in various fields of biomedical research, such as chemists, pathologists, pharmacologists, toxicologists, immunologists, oncologists, and industrial technologists, now focus much of their research on the interface between the environment and humans.
The Journal of Environmental Pathology, Toxicology, and Oncology publishes original research and review articles on ecological effects on the structure and function of cells and tissues, with an emphasis on the environmental effects on carcinogenesis. In addition, the Journal publishes articles that involve factors and conditions in human and animal carcinogenesis, tumor detection and cancer therapy.
The Journal has assembled an international Editorial Board consisting of representatives of various.
Текущий Предстоящие Архив